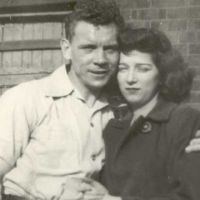 My Dad grew up during the Great Depression. As a youth, he got a job in a bakery. As a result, he turned into the world’s greatest baker! He was also an excellent cook. During WWII he was a mess seargent in the army. Many of my recipes are his.

My Mother, on the other hand, never learned to cook until she was married. She tells a great story about making noodles. Dad, who did everything by feel, told her to mix together eggs, flour and water until it felt right. She had one of the neighborhood boys running back and forth to the neighborhood store alternately for eggs and flour. She finally called her Mother (Babi) who came and helped her, after laughing for quite awhile. When Dad came home there were noodles drying from every available spot! Mom eventually learned to cook quite well. She experimented with Babi’s pierogies and mushroom soup until they excelled. Her chiffon cakes and pies were incomparable!