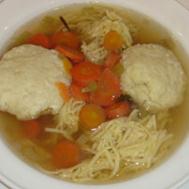 This is a double recipe. I usually make it and freeze half in jars. You can also can it if you have a pressure canner. Or, you can easily cut it in half.

1 large onion, peeled, cut in half

3 large tomatoes, but in half

Remove the giblet packet from the chickens and reserve. Rinse the chickens under cold running water. Place chickens in a large stock pot with very cold water – enough to cover by 2 inches. Add about ½ cup kosher salt. Let stand at least a half hour, up to one hour. This removes impurities from the chicken and imparts extra flavor.

Drain the water, rinse chickens again and rinse pot to remove excess salt. Place the chickens back in the pot and cover with 11 quarts water. On high heat, bring to a boil, lower heat to medium and skim off all foam for the next few minutes. This makes for a nice clear broth. Once no foam presents itself,

Add the onion, shallots, tomatoes, parsnips, peppers, marjoram, bay leaves, rosemary, chicken giblets and about ¾ of the parsley. Divide the celery and carrots in two. Cut the stems of the celery into thirds and add to the pot. Cut the carrots into thirds and add to the pot. Once the soup begins to boil, cut the heat back a bit. Add a few tablespoons of salt.

Allow the soup to simmer at least 1 ½ hours, depending on what type of chicken you use. Roasters and stewers will require longer simmering. The chicken should be fork tender. Turn off the heat.

Slice the remaining carrots and celery and add them to another, smaller stockpot, along with some reserved, finely diced parsley. Place a mesh strainer above the pot and carefully begin ladling the hot broth into the second stockpot. Turn the heat on the second stockpot. Allow it to slowly simmer until the vegetables are tender.

Meanwhile, add the extra raw chicken livers to a small pot and ladle in about two cups of hot broth. Bring to a boil and reduce heat. After about 20 minutes, add the livers to the soup. If you wish, strain the extra broth from the livers back into the large stockpot.

If you wish, shred the chicken and add it to the broth, or save it for another dish.

Serve with noodles, matzo balls, dumplings, or a mixture of all.